Gen. Petraeus: Climate Change remains a threat:  America on the way Up;  The short term economic picture under Obama looks pretty encouraging.  Unemployment is down, deficits are less, gas prices have plummeted, citizen debt is down and consumer confidence is rising.  However, these are merely a "...soothing veneer..." on top of a troubled picture.  Many see America in decline and the middle class adrift and much of the world in shambles and political unrest.  America is not in retreat though the middle class has taken it on the chin.  In fact the country is in better shape to weather the coming storms than nearly every other nation.  We must not be complacent.  There is much the the U.S. needs to do to stave off the potential for abrupt changes in the future.  Climate change remains a threat and a greater threat to weaker more vulnerable nations and regions of the world.  The potential for destabilization is increasing and with that, the threat to American security increases.
Top Ten: Climate and Security for 2014:  The past year we have seen crises in Africa, Middle East, Eastern Europe and the Asia-Pacific but also progress in climate change and security. The Center for Climate & Security reviews the top 10 of 2014.
Prof. David Battisti - CLIMATE CHANGE AND GLOBAL FOOD SECURITY (YouTube):  Presented at the seventh 2014 "Our Changing World Lecture Series" at the University of Edinburgh. David Battisti is a Professor at the University of Washington, U.S.A.
THE CENTER FOR CLIMATE & SECURITY-EXPLORING THE SECURITY RISKS OF CLIMATE CHANGE:  This site is operated by an Advisory Board of retired Admirals and Generals.  It is an excellent source of information on climate and security issues domestically and internationally.  There you will find links, articles, and reports from the Department of Defense and all military branches.

"But the challenge of global climate change, while not new to history, is new to the modern world.  Climate change does not directly cause conflict, but it can significantly add to the challenges of global instability, hunger, poverty, and conflict.  Food and water shortages, pandemic disease, disputes over refugees and resources, more severe natural disasters - all place additional burdens on economies, societies, and institutions around the world."                              Secretary of Defense Hagel at Halifax International Security Forum Nov. 2013 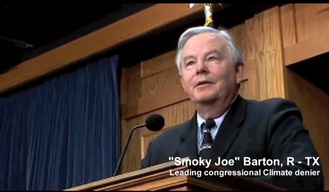 This YouTube is editorial but it does show a representation of both sides of the climate/security debate and who some of the parties are:  "Climate Denial Crock of the Week - Climate Change and National Security - Part 2" (VIDEO)